The party is over, but the celebration has just begun for our nine lucky winners.

On June 29th, we launched our 3rd Birthday Party and announced that we are hosting a contest with 9 awesome prizes. To enter the contest, we asked our Pro users to send us their most creative birthday wish. We received thousands of birthday wishes and had a blast reading each and every one.

Some of the wishes were poems and some written in code. We even received a long, detailed medieval themed story where all Elementors played the role of brave and righteous knights.

After many sleepless nights and liters of coffee, we brought our list of favorites to our top 9 wishes.

Happy Birthday Elementor Developers, without you the world of developers would be still hacking about in code cut and pasted from a plethora of …

… well intentioned bloggers. Your birthday is important to not only us but so many website owners that enjoy your beautiful designs and creative handywork daily and often. May your business grow exponentially bringing joy to the world through your art! Brightest Blessings.

“Happy Birthday Elementors!
May your journey last longer than your your loading screen; …

… Your bugs be fewer than SAP’s;
May your parties be better than the Red Wedding;
And most of all, may your bank accounts be larger than those of your costumers!

Wishing a very Happy Birthday to the best, creative and professionalized app “Elementor”. A very helpful plug-in in helping people like us to build great, wonderful…

… and attractive websites which gives an alluring look to our websites. Upgrading to the Pro Version enabled me to build my website even better. I wish Elementor and it’s team that every year it keeps progressing and giving us the best results to help us create better websites. Totally in love. It’s from the heart. Have a blast elementor an it’s team. Thank you so much. And once again happy birthday.

… (or older for that sake). But you did! Over the weekend I have used your wonderful tool to create a beautiful and for me very necessary site – and that has been an amazing gift from you to me. I thank you and wish you many birthdays over the years to come – and hopefully I will be around to help you celebrate them.

1466 A.D:
Alarm bells resounded through the air, causing the walls of every structure in the Medieval town to reverberate with gusto. Villagers raced outside and dropped everything they were holding to be the first to see the ship …

… that carried who they called ‘The Elementors’.

It was the third year anniversary since the ship had first come in 1463.

As it touched down on a small hill just outside of the town, the villagers ran out to meet it, with all sorts of things: torches, banners, whole chickens, tables, and more.

On the side of the ship, the symbol of the four elements – fire, earth, wind and air – gleamed brightly. The craft touched down with a slight whoosh, and the main port slid open with a walkway towards the ground.

At the forefront of the Elementors that emerged from the ship was the leader, Yoni. An absolutely commanding man who had a gentle heart and rewarded people for good work. Others emerged behind him, and the group made their way down the walkway towards the eager villagers.

It started as a murmur, then quickly rose to a cacophony of sounds. None of the Elementors were able to discern what the villagers were saying until a gigantic banner was raised that read in broken english: HAPPY BIRTHDAE TO YE, ELEMENTORS!

Elated to be a new customer.
Loving all of the unique features.
Excited to show off my websites…

Here’s to many more!

We hope you keep building this incredibly versatile tool. It is without a doubt …

… a one of a kind. This tool beats Wix, Squarespace and any other visual editor on the WordPress market.

Thanks to your tool, I have earned freedom of a 9 to 5 job and managed to build a company that builds sites with Elementor, the last 2 years have been full of learning and wowing towards the way you guys have managed to create a tool for anyone to become a web designer.

You have made outstanding work, I wish you many more birthdays ahead!
All the best.

Dear Elementor Team!
You have fulfilled my dream.

… Saving me a lot of time,
no more coding like a slime.

Hope now all of you guys cheer,
cause you make a rivals blear!

In this joyful, fortunate time,
wish you’ll be forever prime.

Also lots of tasty mugs of coffee,
let none of bugs stop you, nothing!

Huge thanks for amazing software,
Grateful Matt, Poland, live there.

With no coding skills, I had almost lost all my hope,
But seeing you I felt, I found the longest rope…

… The fear of creating a mobile responsive site had made me sweat & sigh,
But with you around, my ideas started to fly high

You have made the whole creation process a treat & full of joy,
It always feels like I am playing & building my favourite lego toy…

Looking back, you were the one who made me confident & strong,
This is at the time when the whole world was saying I was so wrong,

Truth be told, today, you have made my website look professional & stand tall,
I have no doubts, without you, my business would surely fall…

Today, I really don’t know how would my life be without you,
so here is this poem, a tiny way to pay my due.

To my one and only Page Builder, Happy birthday.

This has been our best birthday celebration yet. Here’s to many many more!

Can’t wait to see you all at WCEU in Berlin this weekend. 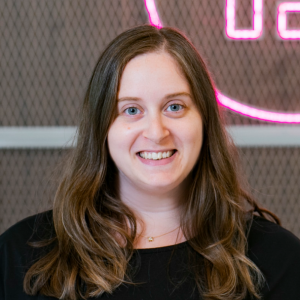 Lisa Raz
Lisa Raz is Elementor's Social Media Manager. She is a proud Canadian, an amateur watercolour artist and loves to discover new cities around the world.

Get the Latest Pro Web Creation Tools
Let's Level Up

Join 3,142,492 Elementors, and get a weekly roundup of our best skill-enhancing content.